Crest Girls Academy is top of the class with NVELOPE 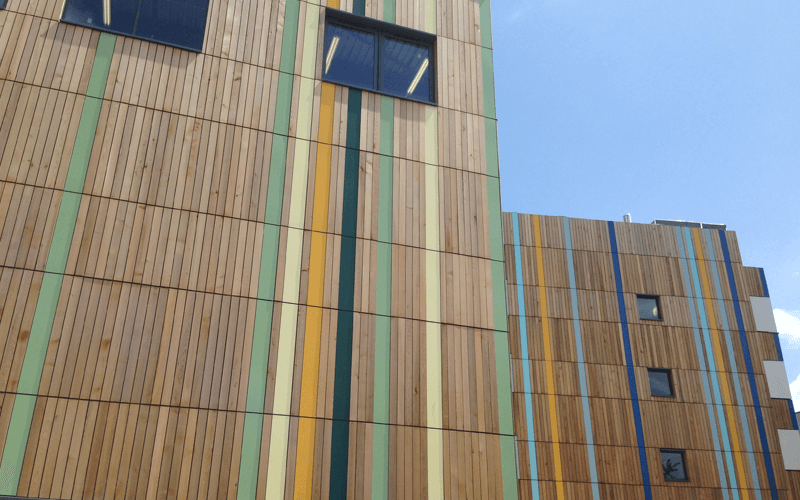 NVELOPE, the rainscreen cladding specialist, has provided an attractive finish with its NV1 and NV6 system, to Crest Girls' Academy in Neasden, London. The cladding support systems have been installed throughout the £40 million refurbishment of the school, to support approximately 6000 square metres of timber and cedar cladding.

Crest Girls' Academy is at the heart of the community and single sex education is offered to girls up to the age of 16. The school required modernisation to new and existing buildings. Two sports halls, large classrooms and activity studios are just a few of the improvements which have been made to the Academy. The refurbishment has provided excellent outdoor areas for both play and leisure, and resources such as the library and theatre are available for not only the pupils but the local community too. The architect, Capita Symonds was regularly on site for design meetings and they specified the NVELOPE horizontal and vertical cladding support systems. The system was installed by sub-contractor Horohoe construction, who worked closely with the architect.

"The NV1 and NV6 system is unbeatable in quality and price" says James Black, Surveyor from Horohoe Construction. "We used the NVELOPE project builder on this project, which sped up the cladding specification process by providing a detailed design for us. The system is easy to install and it took about four weeks to fit the brackets. We have worked with NVELOPE in the past and we are currently using the systems on other on-going projects."

NVELOPE's NV1 vertical flexible point brackets and NV6 horizontal system were well suited for this project as they allow for expansion and contraction of the cladding when under strain from various weather conditions including strong winds. The NVELOPE provides a secure fixing solution for façade materials including high pressure laminate (HPL), timber, weatherboard, fibre cement, fibre concrete, ceramic, thin stone, aluminium composite material (ACM) and many other metals. They are available pre-assembled with thermal isolators to help reduce thermal bridging and also prevent a chemical reaction which could occur between the aluminium bracket and the line in a concrete frame. Stand-off sizes for the vertical range is from 40 – 300 mm.

NVELOPE holds extensive stock to ensure orders can always be met and where necessary, immediate delivery can be provided. All NVELOPE cladding systems can be engineered to project specific requirements thanks to the expertise of its technical design support service. This provides architects and specifiers freedom with an almost infinite range of façade appearance and layout options.